Personally, I like election years with lame duck Presidents.  That way we have primaries for both parties and there can be some comparisons of the debates that

might calibrate sanity a little better than what we’re seeing now.  I have my theories as to what the Democrats would look like in a dogfight, but I’ll keep those to myself for now. I’m pretty sure, though, that it wouldn’t be bitch slapping to prove who’s the most ill-informed.

As it is, we only have the Republican candidates from which to pull threads of continuity in terms of the public discourse and…well…I don’t like what I’m seeing.  There is such a contentious view toward government that is being held by candidates who are (or have been) part of that government.  If you believe their promise when they say, “I’m going to change the way Washington does business” then, I have to ask, why hasn’t that happened already?  And don’t we hear that every election cycle?

I’ve seen Republican presidents with a Republican Congress, Democrats with Democrats and every combination in between, and yet in nearly 250 years of government we are at the same juncture.  Why?

I’ll tell you why— Because this is the government we have demanded from those we’ve elected; filled with contradictions, specific interests, broad interests, pro-this and anti-that positions and programs- just like we are.  These are the problems and solutions we have created and our government is a reflection of our own crisis and concerns.

Does that mean we throw in the towel and resign our vote?  Absolutely not!  Does that mean that government cannot improve?  Hell, no!  It means that we can improve the efficiency and representation of government if we collectively educate ourselves and re-evaluate the criteria by which we decide.  Government will change when we change the conversation we’re having.

I was reading a comment by a leading Republican who was bemoaning the passing of the day when sincere friendships were made across party lines.  He mentioned how (late) Democratic Senator Daniel Patrick Moynihan and Republican Senator Bob Dole were good friends and formed legislative liaisons to work for the common good.  He was regretting how that climate no longer exists and representatives are now thrown out of office simply for cooperating with someone on the other side of the aisle.

This is the result of the anti-government movement being spearheaded by the New Right and fanned by the Tea Party extremists.  Being “critical” of government should not be confused with this new anti-government agenda; we MUST be critical and oppose government tyranny, but we should also embrace the concept of government itself.  That is accomplished by electing people who want to “improve” government and not those who wish to render it less useful. This misunderstanding of purpose has led to an anti-information, reverse-logic, anti-intellectual movement to simplify (and amplify) the argument being made against government.

This movement is reflected in policy.  I was looking at the positions of several Republicans running for office and this reverse-logic, disconnect between rhetoric and reality was profound.  Candidate Dave Funk of Iowa said our objective in the Middle East should be “clear.” He said, that clarity is “Complete US victory and total defeat of the enemy.”

Could any statement be less clear?  What does “complete victory” look like?  Who is the specific enemy?  Muslim extremists?  Al Qaeda?  Is it everyone who “hates freedom” as George Bush clumsily pronounced?  All of the above?  Is Funk talking about complete annihilation of ALL of our enemies in the Middle East?  Again, I ask Mr. Funk, “What the funk is complete victory?”  Be “clear” please.

All of the candidates accuse the Obama stimulus of being the left wing “socialist agenda” of a government takeover and although I don’t expect everyone to agree with Keynesian theory (the way out of a recession is government spending because the private sector cannot possibly do what is necessary), the disagreement is hardly grounds to accuse this administration of a “socialist” conspiracy.

Of course, all of the candidates want to make the Bush tax cuts permanent. They all reiterated the premise that the wealthy will invest and that will create job growth.

Lord, give me strength!

It seems to me that didn’t work real well in the past decade to “stimulate the economy.”  The pledge that “Trickle Down works” reminds me of Lucy, Charlie Brown and the football.

Many people believe the Republican promise that this time it will work, but just as Lucy promises that she won’t pull the ball away, it’s a lie every time.

Save your breath, Reagan-is-God disciples– in order to cover his new federal budget deficits from lower taxes, the US borrowed heavily, nearly quadrupling the debt and we went from being the world’s largest creditor to the world’s largest debtor nation.  (Note to Republicans:  You can choose to believe that our debt/deficit is crippling our nation or you can choose Reaganomics, but you can’t have both).

Hey, I don’t love tax time either.  I barely get by after a mortgage, child support, federal, state, FICA, etc., and I sure would like to put away for a boat (*sigh*).  I don’t want to pay any more than what I believe is fair, but I also know that my personal interests are not the interests of all Americans.  Personally, I wouldn’t be pumping 700 billion or more a year into the military, but I know that there are needs and concerns that other Americans have that may conflict with my own and vice versa.  Therefore, I understand that taxes are not my enemy nor are they the solution.

My job as a citizen is to be informed and remind my representatives of my voice.

That is not what the Tea Party is doing; they are throwing people out of office with a malignant message that has led to a Republican (a Senate race in Utah, for example) losing simply because they cooperated with a Democrat to improve legislation in the best interests of their constituents.  That is not how good government works, that is anti-government and it is a cancer to our constitution.  Yes, a cancer.

This is the direction I am seeing and hearing, ad nauseum, from the new right, that is controlling the Republican debate, and it is forged from the foundry of misinformation and empty rhetoric.  It is defining “government” as a three headed dragon that must be slain to secure our freedom, when, in fact, the conflict is as much a fantasy as that image itself. 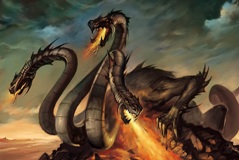 We improve government by improving our understanding of it and electing representatives who also understand its purpose….not by destroying it.