I knew of Ron Knapp for years, but I didn’t really know him until I moved back to the Cedar Valley just over 8 years ago. We were the same age but we didn’t cross paths until I ran into him at a bar in Cedar Falls in 2003.

I had just been hired as the new video guy at the Mudd Group and as he introduced himself he immediately let me know that he was the “man” in the know when it came to who has what in terms of video production.

His manner was so easy going that I felt as if we’d been hanging out for years and I quickly got to know Ron beyond the “legend” of being the guy who looked like Robert DeNiro.

Everybody knew him and everybody liked him. He worked with everyone at one time or another, shooting local commercials, political campaigns, what have you.  He was professional, kind and had a smile that….well, if you said it lit up a room, you’d be making a profound understatement.  His personality was just as electric.  He was quick with a joke and even faster with a pat on the back when he came up from behind you at any of our favorite pubs.

We saw a lot of each other in each other and could talk about anything…except politics.  Ron would politely walk away if I got onto my soapbox.  Without fail, though, we would always talk about someday pooling our resources and abilities and starting a production company of our own.  We knew we’d be successful.

I went through a divorce a short while after arriving and it was Ron who had the words I needed to prop myself up and to believe in my future.  I will always treasure him for that.  On occasions, one of us, or both of us, would be going through one of those times that middle aged men go through where we question our worth.  We’d posture to show the other how mentally tough we were and how we’ve got everything figured out.  We both knew better.

Over the years, we didn’t see that much of each other, but, when we did, we always had laughs and said, “We gotta make plans to get together!”  I guess we always felt as if we would, and so we never actually did.

Ron’s birthday is just a couple of weeks before mine and we celebrated our 50th, along with some other 1957 babies a few years ago. Ron and his wife Wendy and a dozen of us rode our motorcycles on a charity run for a Children’s Hospital.  I remember being jealous of Ron because he looked so damn cool. 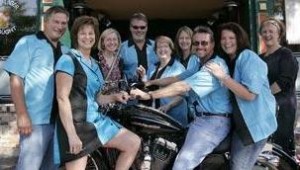 I can’t pretend that we were best friends; he had a lot of friends who were a lot closer to him than me…but , I thought I had time. It turns out that I didn’t because Ron passed away from a massive heart attack last night.

So many tears are flowing in this town and from everyone who knew him.  Even the sky is crying today.  I write because I believe these messages travel through space and into other dimensions and that this one will reach Ron.

I’m going to miss seeing you at Hy Vee, old man.  When I said “You look good” I meant it.  You always do.