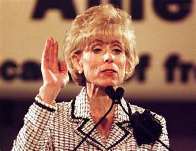 A letter appeared on the internet in 2000.  It was addressed to Dr. Laura Schlessinger who had pronounced on her radio show that “homosexuality is an abomination according to Leviticus 18:22; and cannot be condoned under any circumstance.”

The letter has been attributed to several sources, including Aaron Sorkin (and a version was used on “The West Wing”), none of which pan out consistently, but it stands, nevertheless, as a brilliant satirical response and casts a glaring light onto the hypocrisy being delivered today by Bob Vander Platts, the Iowa Family Policy Center, the National Organization for Marriage and untold millions who use fundamentalist Christian doctrine to define ethics, morality and Constitutional rights.

I am posting the letter here, but I must remind everyone that I did not write it.  God, how I wish I had…

Thank you for doing so much to educate people regarding God’s Law.  I have learned a great deal from your show, and try to share that knowledge with as many people as I can.  When someone tries to defend the homosexual lifestyle, for example, I simply remind them that Leviticus 18:22 clearly states it to be an abomination…End of debate.

I do need some advice from you, however, regarding some other elements of God’s Laws and how to follow them.

I know you have studied these things extensively and thus enjoy considerable expertise in such matters, so I’m confident you can help. Thank you again for reminding us that God’s word is eternal and unchanging.

Dr. Laura, responded by saying that gays and lesbians are “creative, intelligent and valuable” and that her previous words were “poorly chosen.”  What she meant to say, she made clear, was that they are the result of a “biological error” and that keeps them from “relating normally to the opposite sex.”

Well…I’m no “doctor” but, if the difference is biological…doesn’t that make it…natural?  Just askin’…