Romney was opposing what is being called “The Buffet Rule” which would end the tax loopholes that bring his tax rate down to around 15%.  Romney is hoping that the average American, who pays over 20%, still hates math and won’t investigate the matter too much.

Mitt feels that the shelters and loopsholes that exist in the present system are a fair reward for all the jobs he and other multi-millionaires create. Yet…with those loopholes still in place, and with the Bush tax credits on the record for 10 years now, Mitt and his friends still don’t think they’ ve put enough in the bank to risk growth.

Romney defends his position by stating that President Obama’s policies have lost 3.1 million jobs.  However, even a 5th grade level analysis reveals that Romney uses the entire month of January 2009 to come up with that figure.  Logic concludes that those 820,000 lost jobs belonged to a previous administrations policies. In fact, 2 million jobs were lost in the first three months of Obama’s presidency, before any of his policies could have begun to take effect, and so honest analysis thereby shows that the numbers Romney (and virtually every Republican) uses are erroneous. 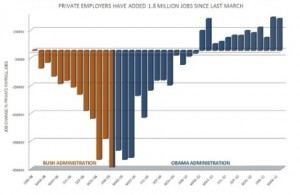 Does raising taxes lead to fewer jobs?  The short answer is “yes.”  In fact, Herbert Hoover made the mistake at the beginning of the Great Depression to raise taxes in order to cover the growing deficit and that saw nothing but less liquidity in the market, exacerbating the problem.

There are those today who want to raise taxes on higher incomes for the same reason, but many of them are confusing two different tax concepts and masking the solution to the problem.  It isn’t about raising taxes; it’s about more equitable tax burden.  This is what Warren Buffett was stating in his now infamous declaration last Fall about his taxes and those who work for him, where he stated that he, in fact, pays less.

Two months ago in Time Magazine, Buffet suggested that America change its tax policy to ensure that people who earn their money from investments rather than by working for a paycheck contribute their fair share. “We need a tax system that takes very good care of people who just really aren’t as well adapted to the market system and to capitalism but are nevertheless just as good citizens and are doing things that are of use in society.” The article clarifies his position with a “Note to bond traders: your higher taxes should help subsidize the building of bridges and the running of state-sponsored day-care centers.”

Let me offer an explanation of the “Buffet Rule” provided by David McAdams, an associate economics professor at Duke University (it must be noted that this example preceeds the actual presentation before Congress and uses 25% to illustrate its application instead of 30%):  If a Middle Class family is now paying 25% in marginal tax rates the Buffett Rule does not change what they pay.  The Middle Class tax “burden” today, however, is greater than for a millionaire whose income derives from both a business (35 % tax rate) and Capital Gains (15%), and more than half of the income comes from Capital Gains.  What he/she is paying is less than 25% and this is for whom the Buffett Rule will come into effect. The question everyone else should be asking is, “Will the millionaire have less incentive to create jobs?”

No. Why would they?

This rule lowers the marginal tax rate for whom it applies to 25% (from 35%), however, it increases their tax burden to a fair share.  Confused? Here’s an example: Someone makes $1,000,000 in Capital Gains and makes a salary from their business of $100,000 (S Corp status allows someone to pay themselves in a lower tax bracket). 15% is paid on the million and 35% on the 100k for a total of $185,000. That is less than 17%, which is less tax burden than the Middle Class earner paying 25%. Under the Buffett Rule, the millionaire will pay 25% on ALL income, however, will now keep 10 cents more on every dollar their business generates (75 cents compared to 65 cents before), therefore, the incentive to expand his/her business will increase. In short, it’s a 10% cut in marginal rates, while evening the tax burden, and a 10% increase in income.

They pay more in total taxes, but can make more from their business. That’s incentive to expand.

McAdams, compared this to the Bush cuts which lowered the marginal tax rate of the highest earners by only 5% and states: “Anyone who argues that eliminating the Bush tax cut…will destroy jobs must therefore also acknowledge that the Buffett Rule…will create jobs.”

Raising tax revenues while lowering marginal tax rates, and increasing the incentive to expand (and hire) is exactly what Mitt Romney should be talking about.  Yet…he’s not.  He’s talking like Mitt Romney who is campaigning to protect…Mitt Romney. 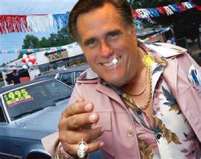