I had a dream where America settled down for a day.  We all took a collective breath and did some research about social spending along with doing a little math.  My dream was inspired by a news report that I saw, as I was nodding off, about how a big part of the budget controversy, that separates the right from the left, is based on social programs.  So as I drifted off, having taken some NyQuil for my chest cold, I imagined a nation working on this problem together…

We looked at federal spending on welfare programs and subtracted social security, veteran’s pensions, children’s healthcare, and Medicare (because those are different arguments) and we looked for welfare numbers in terms of what people receive and for how many people get off welfare and go back into the tax base.

Because it was a dream, people kept changing but one of my Facebook “foes” was there, along with President Obama, who oddly turned into George Bush. Then for some reason my ex-wife showed up and turned into my mother and for reasons I can’t possibly explain, she became Charles Kuralt.

I remember thinking, “I’ve got to make an appointment with my therapist in the morning.”

We were going to compare those numbers to those who are freeloading the system to find out how much of our tax money is being thrown into the abyss. But as fate would have it, a car alarm went off around 2 am and I woke up before finding the answer.

But along with my coffee this morning I was inspired to finish what my dream started and I began to do some investigation.  I investigated real numbers from the Congressional Budget Office and Child Welfare Information Gateway along with my pay stubs to discover what percentage of my income that I spend on non-medical welfare.  I washed it against a current census analysis to determine what I personallyWASTE on those welfare recipients who take unfair advantage of the system and I came up with a number.

I was surprised.  Without a doubt, it isn’t right, it isn’t fair and I should get this money back!  I throw to the wind every year—- $36.

Why, I could be taking my sons to Chuck E Cheese one more time every year! (Well, not if we want drinks) and I am incensed that I have lost the freedom to decide HOW my $36 are spent!!!

For me, with a good salary, I spend less than 50 bucks a year, or about 10 cents a day on those Welfare Queens we keep hearing about. 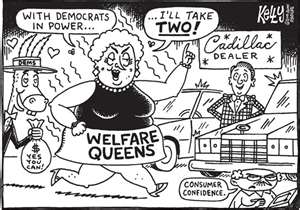 I admit, this was not a truly scientific analysis but I encourage anyone to look at their own taxes, look at social spending figures, research the number of people who are on and who get off of welfare (the numbers are out there) and determine your actual burden for yourself.  And, to be fair, if we take that number based on average salaries/wages, multiplied by the taxed work force, we are looking at over 2 billion dollars compiled a year- and that is a fair chunk of change that could be used in better ways.  But, then when you consider that’s what we spend in a week in Afghanistan, perhaps there is a more useful discussion about our taxes that we should be having.

There are a lot of broad strokes in today’s protests. “Stop big government!” “Take America back!” “Lower taxes!”  That’s all very well and good, but what, specifically are we talking about?  We’d all love to keep more money in our paycheck, but which programs do we want to get rid of?  I met a person who admitted that an unemployment extension and food stamps made the difference in his life to bridge hardship–and today he is successful- but now he opposes those very entitlements!

I also saw on the news, as I was drifting away, some people in the South protesting “big government” who were also upset that the local high school wasn’t meeting mandated health standards; it seems there aren’t enough government inspectors to ensure safe food for their children.

I had a discussion with someone recently who used the oft quoted proverb “Give a man a fish and he eats for a day. Teach him to fish and he eats for a lifetime.”  I like the Chinese proverb, too, but here’s the ironic twist when used by modern conservatives who find social spending repugnant- it’s a “socialist” concept.  It is the philosophy of sharing and teaching as a community.

“Socialism” is, of course, that dirty word that many believe was spawned from the lap of Satan, but I wonder how many people with signs at Tea Parties claiming that “Obama is a Socialist” can define what the word actually means. Our Constitution was written with strands woven into a Republic by and for the People?

So…let’s all take a breath…define a few terms…do a little math…and maybe start a new conversation.  Many of us will still disagree profoundly. Some people will come up with different numbers regarding social spending and draw different conclusions. And there will always be fundamental, philosophical differences between people, but if we could collectively determine that solutions exist in our cooperative efforts and that much of our argument (on either side) is based on hand-me-down rhetoric without a genuine analysis of what it is we’re screaming about…maybe we can inch toward better politics….or maybe I’m just dreaming again.

Suggested reading (from all sides of the issue of welfare):

“The Welfare State Nobody Knows,” by Christopher Howard

“Regulating the Poor,” by Piven and Cloward

“The Myth of the Welfare Queen,” by David Zucchino