Every year I am delighted to be asked to emcee our annual Sturgis Falls Days parade.

It’s essentially our local founder’s day event and every year the Black Hawk County Republicans have a float, and the Democrats, as well, and every year there are several candidates from both parties running for office who work the crowd.

I enjoy offering an affirmative handshake to everyone as I truly love the political process and feel blessed to have good men and women on our ballots.

This year, however, a float suddenly appeared in the parade that said: “Marriage is one man and one woman. Support Traditional Marriage by voting NO for Supreme Court Justice Wiggins Nov. 6, 2012.”

I had started the announcement, which I am obliged to read, before I knew what I was saying.  When I realized, I am told that my disgust was clear. 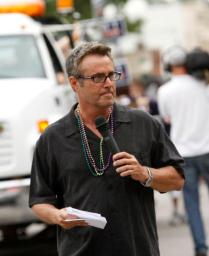 “Vote for me!” is one thing, but “Don’t vote for him!” is quite another.  Not only do I disagree with the premise, but I don’t think a local, hometown parade is the place to tell voters how to vote on ballot referendums.

The “float” was entered as part of the initiative of the National Organization for Marriage and Iowa’s leading anti-gay spokesman, Bob Vander Plaats, to call for a ballot referendum to overturn the state’s marriage equality law.

According to Vander Plaats, opposition to gay marriage is not rooted in fear and hate, but rather in love and compassionate truth.

Bob, the answer to your rhetorical question is quite simple:  Your point is

What Vander Plaats and the “Traditional Marriage” supporters believe is that homosexuality is deviant, as Bob’s list of incestuous comparisons illustrate, and should not, therefore, be included in the exercise of civil liberties.  But, I am here to tell you (hold on to your Clairol for Men, Bob), “Homosexuality is a natural way of being, not a lifestyle choice.”

Millions of gay and non-gay people know that, but I’m pretty sure we’re not going to convince Bob and the millions who, instead, practice self-righteous, sanctimonious exclusion of that before November, 2012. I’m going to place my case on the legal issue of civil rights as clearly outlined in our Constitution.

Let me break this down….the Iowa Supreme Court ruled: “We have a constitutional duty to ensure equal protection of the law. Faithfulness to that duty requires us to hold that Iowa’s marriage statute violates the Iowa Constitution…if gay and lesbian people must submit to different treatment without persuasive justification, they are deprived of the benefits of equal protection…”

“Our responsibility…is to protect constitutional rights of individuals from legislative enactments that have denied those rights, even when the rights have not yet been broadly accepted, were at one time unimagined, or challenge a deeply ingrained practice or law viewed to be impervious to the passage of time.”

In other words, no act of legislation, no matter how popular it may be, can be added to the Constitution that will alienate any group of people from the civil rights it is designed to protect.  The Iowa Marriage Statute (or Proposition 8 in California) which declares that marriage is strictly “between a man and a woman” does exactly that.

The Constitution would become a worthless document if we allowed for such amendments and the role of the Supreme Court (national or state) is to make such rulings.  Regardless of how anyone feels about homosexuality or specifically the morality of same sex marriage, your individual freedoms are protected when the Constitution is upheld as it was in Iowa and they are threatened by any movement in the other direction such as what Vander Plaats promotes.

Recently, I posted the definitions of a Republic and a Democracy (“Wasted, Exhausted and Murderous”) because it is clear to me that a lot of people don’t understand the differences and that misunderstanding was now defining our modern political process. The distinction is important and the system of government intended by the Framers is being lost as we become more and more of a direct democracy instead of the representative democracy (a Republic) they created.

Nothing illustrates this confusion better than this debate regarding court rulings over the rights of gay Americans to marry. The argument against gay marriage made by Vander Plaats and NOW is the perfect example of how dangerous this misunderstanding has become.

Vander Plaats was quoted saying, “If they do this with marriage (re: rejecting the Defense of Marriage Act), every other one of your freedoms is up for grabs.”

What freedoms are those? The freedom to deny other groups of people their freedom?

The scary truth is that what Vander Plaats wants (and quite possibly a majority of Americans) is to control the Supreme Court and fashion the Constitution to fit their specific religious concept of morality. THAT, my friends, is what will threaten “every other one of your freedoms.”

Which brings us to the difference between a Republic and a Democracy. Vander Plaats states that the Iowa ruling is contrary to “the will of the people.” In other words, he feels that since the majority feels one way (that marriage is between a man and a woman) that it is necessarily true and therefore just.

For the record, once upon a time, the “will of the people” was that women should not be included within the political system by having the right to vote.  The intention of our Founding Fathers for a representative Democracy worked, however, and the 19th Amendment was passed.

I don’t want to confuse Bob with history and precedent, so let’s stick to the present.  An Iowa representative, Danny Carroll (chairman of the Iowa Family Policy Center) said, “Ladies and Gentlemen, this is a test of your faith. Will you be found faithful and accountable to the creator?”

What he is saying is that the will of the majority, who are Christian, should exercise their voice so that the Constitution becomes exclusively a document to uphold Christian principles.

I know that a lot of Americans would be just fine with that; they feel safer believing that this is, in fact, a Christian nation founded specifically on Christian doctrine, but, please, read the Constitution.  You may come to realize why the collective genius of our Founding Fathers predicated their great charter on religious freedom, and specifically stated that we cannot establish a national religion; it would destroy the foundation of every other freedom it protects.

That is why they created a Republic- so that mob rule cannot hijack our country and cherry pick the freedom they fought for.  Our government is not the proxy of the majority, it was designed as a check and balance system of leadership, which protects the quietest voice among us as vigorously as the loudest.

Several people expressed disappointment to me afterward, and even a conservative friend of mine said, “This was not the place for that,” but I’ve also heard people say that “gay marriage rights are not a burning issue” in the upcoming elections and the debate is “a waste of time.”

My friends…in many ways it is the issue because it represents the very meaning of Freedom and Constitutional protection…and isn’t that what everything is predicated upon before we can even begin to fix anything else?