This weekend I was in a conversation with a politically conservative friend and we discussed the former controversy surrounding the Islamic Cultural Center built in the area of Ground Zero.

Even though the controversy more or less subsided after it opened last September to very little protest and many conservatives have submitted that it was within the parameters of religious freedom, our conversation underscored the ideological gap that remains between how the right and the left approach issues.  My friend still contends that the location of the site was in “bad taste and that it should have been built elsewhere” although he concedes the legal right that it can be wherever it wants to be (codes permitting).

He looked at me sternly but sincerely.  “That land is hallowed ground to a lot of people and I don’t understand why the builders weren’t sensitive to that. This is painful to a lot of families.” 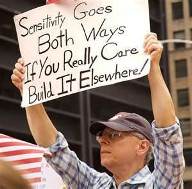 I responded, “I’m a former New Yorker and even have a brother who had just exited the train at the Twin Towers-  I get it!  I understand the sanctity of that land and what many people are feeling, but this should not even be a question of “taste” since it was not a shrine to pay tribute to the terror and murder inflicted by Islamic extremists; rather it is a religious sanctuary to uphold tenets of peace.

The mosque at Ground Zero may be a tired issue now as very little protest remains, but the core discrepancy in the perspectives of someone on the right from someone on the left seemed consistent as we seamlessly moved into a discussion regarding gay marriage.

My friend, again, being somewhat conciliatory said, “I believe that a gay person should be accepted completely by society, but marriage is a long held sacred vow between a man and a woman.  Why can’t they be satisfied with a civil union?”

I countered with, “A church, where that religious doctrine defines the contract of marriage in the manner you stated, has every right to refuse the service to a gay couple, but constitutionally guaranteed civil rights are not defined by religious constructs and marriage, in and of itself, is a legal relationship between spouses, defined as a loving union.  So therefore, why can’t any two, loving adults, enjoy the same respect and privilege?”

I don’t view my friend as an “enemy” politically speaking, rather I find him to possess qualities that I consistently challenge myself to uphold; showing tolerance and respect, a willingness to listen, and to look for answers that lead to a more peaceful and healthy existence. We differ, however, on how our core beliefs are realized. The reason I find these differences interesting is because they are consistent. Whether it’s the social ramifications of an Islamic center or the marriage of gay Americans, or the affordability of healthcare, or economic solutions, there is a fundamental conflict in how our brains process the problems and, therefore, the solutions.

My friend used a defense that I hear often: “A majority supports how I stand on these issues. Are you saying we’re all wrong and you’re right? What makes you right, especially when you are in the minority?”

It isn’t a personal vanity that holds me to this perspective; it is the essence of what is written in our Constitution.  Conservatives may hold the majority on many issues and they profess to be the movement that supports individual liberties and democracy, but they are at odds with their own premise.  They are asking government to dictate law according to their personal interpretation of ethics and morality.  While that interpretation may reflect a majority that’s not how our system of government was intended.

Our founding fathers created a charter based on religious freedom and freedom of speech; the government they designed protects a minority as vigorously as a majority by being a representative democracy to ensure the civil rights and liberties of all Americans. It cannot be the determination of the majority to dictate what is right and what is wrong, rather we must respect our charter which clearly outlines the disciplines by which to avoid tyranny and to uphold justice (for all).

Well over a million American soldiers have died in defense of freedom and to amend the parameters of what constitutes that freedom is to negate their sacrifice.  Painful as it may be for some, freedom has a price that may, at times, offend their own sensibilities; life, liberty and the pursuit of happiness is extended to every American, even when others (even a majority) do not fully understand or accept those rights.

America’s freedom was not forged by bleeding hearts; rather it was cast in the iron of justice, where compassion is found in our adherence to the truth and what is right. Sometimes freedom is painful.

Okay…I can be verbose.  My friend said, “Good answer” and then smiled and added, “but I still don’t buy it.”

Stalemate.  So we tabled our disagreements and went on to enjoy 9 holes of golf where he roundly dismantled any notions I may have had that my game was improving. In a way, the fun we can have is more uplifting than the frustrations we sometimes feel from our political differences and from that, I regain my optimism that solutions are possible.

Now, if I could just correct that slice…