I saw a Mitt Romney commercial where Obama is castigated for being a liar.  The spot includes Hillary Clinton saying, “Shame on you Barack Obama!”

Bear in mind, this quote is from the contentious 2008 primaries and I simply can’t imagine what will be culled from the Republican debates as the other candidates called Mitt Romney everything except a good man for President, but the commercial ends with a new statistic stating that Obama’s jobs record is the worst since the Great Depression.

My shoulders get tight when I am faced with blatant hypocrisy and…my shoulders got tight.  Romney’s statistic regarding Obama’s job record is as false as anything he can accuse Obama of saying (and by the way, no specific “lie” is uncovered in his commercial).  The statistic that makes 2009-2012 the worst jobs record since the 30’s includes January of 2009, before Obama was sworn in, but also the first months of his presidency which can only (if you’re being rational at all) be attributed to the economic death spiral he inherited.

Bush’s last year in office and Obama’s first, essentially saw the same numbers in terms of job losses, but the relevant curve shows Bush job loss numbers getting bigger each month, while Obama’s record shows the number getting smaller until there is, in fact, positive job creation in March of 2010 (Bureau of Labor Statistics). 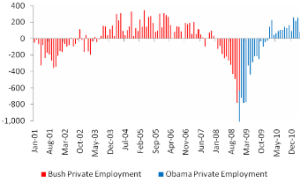 I am often asked by Republicans “When are you Democrats going to take responsibility?  Obama has been President over THREE YEARS!”  It’s an easy question to ask but only if you’re looking for an easy answer; unfortunately the problem is complicated and therefore so is the answer.  I did come up with an analogy, however, that played out pretty well in a recent conversation.  A Republican friend is a baseball fan and I asked him to explain why a starting pitcher is penalized for the runners he left on base even when it may be his reliever who gives up the hits where they score.

“Exactly!” I answered.  “That’s the same thing we have here.  Obama relieved the pitcher who loaded the bases.

This was the deepest recession in 80 years and he kept the inning from getting worse, i.e. a depression.  Obama may have given up a hit or two but his pitching is not why the score is what it is.”  If I were to continue this analogy longer than I should (too late?) I could say, “Obama’s first term was still Bush’s inning.  It will be the second term that is Obama’s to win or lose.”

The truth is I love analogies!  Let’s say two guys are standing next to a soda machine that offers Coke and Pepsi and they’re arguing over which is the best.  One guy claims “Coke” while at the same time he’s putting

money in the machine and choosing a Pepsi.  His credibility becomes a bit suspect.  This is how I view the current economic debate.  While Republicans are claiming to own the concept of fiscal responsibility and attach the word “crisis” to everything from the national debt to debt ceilings, and federal spending, they played more than a small part in creating this mess.  The debt to GNP percentage increased 27% under George W. Bush, while Obama has increased it by only 9% – and the majority of Obama’s percentage is from continued programs from the Bush administration.  Bush raised the debt ceiling 13 times and no one said a word, yet Obama faced that (politically fabricated) crisis and suddenly Republicans cried, “The sky is falling!”

Interestingly, only President Clinton reduced the debt during his two terms and he was the first to do that since…are you ready?  Jimmy Carter.  Reagan was the first President to turn us into a debtor nation and he tripled the national debt.  George Bush, Sr. raised the debt percentage 13%.  Obama conversely has increased our debt in real numbers by less than 2 trillion dollars, while his predecessor raised it over 6 trillion.

Maybe it doesn’t matter how, where and when it all started, perhaps, all that matters, is to end the politicization of our problems so we can begin to discuss these issues rationally, where we are informed by reality and facts.  Can Democrats stop blaming Republicans and can Republicans stop their spin to demonize this President and to exclusively cast Democrats into the role of the spenders?

We are not having rational discussions about trimming the budget and we are not educating ourselves when it comes to understanding spending in a recession, deficit spending or debt ceilings and debt to GNP ratios.  There is a vocal far left that castigates everything about corporations, Wall Street, and anyone with wealth, but it is the extreme right that is controlling this debate by holding moderate Republicans ransom if they so much as cooperate with a Democrat.  No doubt, the squeakier wheel will get the grease, but the squeak on the right is being financed by interests with lots and lots of money (i.e. the Koch brothers) and has convinced half of America that we need to fix those of us who didn’t make the mess and allow those who did to conduct business as usual.

We are now in full election year mode and the mudslinging will only get worse; Obama ads will misinform voters about Romney and Romney ads will be as disingenuous as the one I just saw.  I have no delusions whatsoever that I, or any number of us, can change that; what we can change, however, individually, is how we respond to those ads.  We can do a little research.  We can know that political ads bend the truth the way detergent ads sell their product.  Do our whites really get whiter and do our brights get brighter? 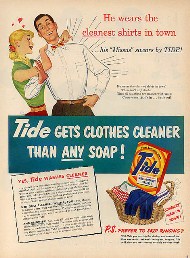 I think we know better.