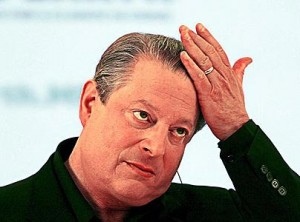 2000 was the year Al Gore didn’t become President.  The historical record of his “not becoming President” is pretty clear and I will never be happy about a fraudulent re-count in Florida or Supreme Court interference driven by partisan manipulation, but I was able to reconcile the “defeat” because that was Al Gore’s election to lose.  If he’d been just a little more convincing the opening for an election to be stolen wouldn’t have been there.

I remember the campaigns, though.  Gore was running on the promise of continuing the prosperity we seemed to enjoy under Clinton and to use the surplus and financial stability to invest more in education, healthcare and infrastructure.

Bush sort of promised the same thing.  Bush wanted to be a President that maintained stability and peace and his message was appealing to almost as many Americans.  What he clearly had in his favor was a comfortable charisma that motivated a lot of swing voters.  When he became President he immediately implemented a plan to maintain prosperity but it focused primarily on those who were already prosperous and he reduced the discretionary spending that would have helped those who weren’t.

He even underfunded his own programs.  No Child Left Behind (wrong from conception to execution) was under funded; his prescription drug program was under funded.  He flatly denied highway and bridge reconstruction in lieu of an economic stimulus package that did nothing more than put a couple of hundred bucks into Americans pockets while healthcare costs rose due to an insurance industry that continued to commoditize sickness.  Mostly, his tax cuts allowed for wealthier Americans to increase their holdings.  His shared prosperity programs were doomed to fail ultimately by his party’s own design.

I often hear people on the right ask, “When are you Democrats going to stop blaming Bush for the economy?”

Well…when are we going to stop blaming Booth for assassinating Lincoln?

History is what it is, and exploring it gives us clarity to improve.  And in that pursuit of truth we must also acknowledge that while Bush inherited a seemingly robust economy, there was an invisible powder keg that was created under Clinton.  Unregulated derivatives and expanded deregulation of the financial market were hatched on Clinton’s watch by his Federal Reserve Chairman Alan Greenspan and anyone who blew the whistle on the risk of these derivatives, like Commodity Futures Trading Commission chairperson, Brooksley Born, suddenly disappeared.

Why?  Because people were making insane amounts of money.  The bottom was going to fall out one way or the other, even if Gore had become President, but more serious consequences followed the path that was taken by Bush.

In that high risk and volatile financial environment there are two choices. One is to continue the Wall Street money train and to deregulate even more, allowing for more and greater opportunities to invest or to short trade, and the other would be, as I believe Gore would have done, to immediately use the surplus and discretionary spending to bolster our infrastructure, grow educational opportunities, create job programs and to reform healthcare.

In 2005 derivatives drove the still rising housing market.  Fannie and Freddie were supported by Republicans as well as Democrats and the initiative to bring the American dream of owning a house to Americans of modest means was embraced by President Bush.  Why not?  Americans were motivated, they were buying homes, living the dream, and people were getting rich.  But derivatives left unchecked became more and more toxic and more of them created higher risk bundles as derivatives of derivatives of derivatives hit the market.

It was all contingent on the housing market continuing to boom, but by 2006 values got too high and…the bottom fell out.

The whistle didn’t blow quickly because people were still making money on short selling and no one wanted to admit that we were heading toward cataclysmic collapse.  The derivatives tanked, the loans defaulted, the banks were over leveraged, AIG who insured the risks is now paying out more than its reserves and, well, the rest is history…..

This would have happened under a President Gore, as well, but there is a crucial difference.  Recovery would not have been as difficult and the fall might not have been as severe if America had been investing in itself all along.

The economy would not have been as fragile because production would not be lagging from poor interstate commerce and inadequate training.  With federal assistance toward infrastructure, state budgets would not be as over leveraged and job creation programs would have already been underway.

The conversation today would be less about debt ceilings, government spending, deficits and taxes and more about correcting what even Alan Greenspan described as a “big mistake.”

That mistake was to believe that markets will police themselves and that we can survive the Machiavellian thinning of the herd created from profit-at-any-cost motivation.  Markets don’t exist without people and people do not exist without at least some relationship to fear and greed.

I’m not even going to demonize those qualities, they simply exist in all of us as necessarily as our humanity and compassion, but my caution is to not let the lesser parts of our character determine the rules we live by; or at least let’s not put our trust into the parts of ourselves we don’t even trust.

We need financial reform and the sensible regulations a mixed market demands; we need Administrations who understand the investment of infrastructure, including education and job creation; we need voters to understand that such investment is not “spending” but the surest way to securing a prosperous future.

Someone asked me the other day how I would grade Obama, so far, as President. I said a “B.” Even with Herculean accomplishments in the face of lock-step obstructionism, I cannot give an A to any President when the climate is so contentious, no matter what measure of success they’ve had to overcome those conditions.

I gave his predecessor a “D.”  I would have given him an “F” but I really do think he would be fun to have a beer with.

I can’t help but wonder what I would have given Al….