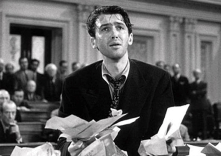 Recently, I joined a group that was invited to the State Capitol to petition legislators during the 85th Iowa General Assembly, and I must admit to being a bit awestruck.  Even as a salty old wonk that has followed, written and lectured about government and civic duty for decades, I felt like a grade-schooler on a field trip; I was amazed at the majesty of it all.

That being said….there was a strange brew of optimism along with frustration as we talked to lawmakers about our initiative; I was simultaneously emboldened by the process and….a little aggravated.

Let me start by telling you about the initiative.

A Not-For-Profit foundation called “Sing Me to Heaven” presented themselves to my Rotary Club in January and we were uniquely moved by their mission.  That mission is to provide low income families who have lost a child with financial assistance toward funeral costs.

“Sing Me to Heaven” was created in 2011 after Jennifer Mehlert, a young mother, lost her daughter Natalie and suffered the reality of financial burden during her overwhelming grief.  Along with her own mother, Diane McIntosh, they committed themselves, in Natalie’s memory, to help other parents, usually young, who have no insurance or financial security, with up to $2000 toward funeral costs.  The intention and hope is to alleviate some of the pain and burden the grieving family suffers. (www.singmetoheaven.org )

The bill asks for a one-time grant of $100,000 to set up an infrastructure and also to promote the organization so that it can self-fund into perpetuity.

While there are counties and funeral homes that provide assistance to bury children, there are still hundreds of families annually, in Iowa alone, who do not receive help, and SMTH is the only organization in the country attempting to bridge that gap.

From a personal perspective, not only do I feel that this is a worthy cause to support but I believe that it is an opportunity for the State of Iowa to affirm its place in the nation as a compassionate state that believes in the quality of life.  By assuring that no family in Iowa, who has suffered life’s most unimaginable loss, will be denied the proper burial of their child, our state can be proud as the First in the Nation to do so.

For those who don’t know, citizens, ordinary folks like you and me, can wait outside of the House of Representatives and petition lawmakers.  There is a note that you fill out stating your purpose (in our case a bill has been filed by Representative Bob Kressig) and who you would like to talk to, that is given to the Doorman.  The Doorman

delivers it to a Page who, in turn, presents it to a representative inside.

The representative may not be present or they may have other pressing matters, but more often than not, they will come out of the chamber to speak to you.

A conversation ensues where we first present the details of our bill and respond to their questions.  But, the ultimate purpose is to get their support so that it is, at least, offered to go to a committee for discussion.  Obviously, the more representatives who support your cause, the more likely it will be put into the Session agenda.

I should preface, that Rep. Kressig also called a Press Conference where news agencies that cover Des Moines are invited to hear about the case we’re going to lobby.  As a marketer, I certainly understand the strategy; the more buzz, the more attention, the more likely we are to be taken seriously.

Every representative we talked to (around 10), whether a Democrat or a Republican (and at least one who aligns with the Tea Party) was engaged and respectful.  I’m not going to mention names because I have no intention here of holding anyone to the fire (I have mentioned Bob Kressig, however, because he has been a champion for this bill) but I was sincerely impressed by their genuine desire to do good work for the people of Iowa.  I don’t believe that one single person resides in that chamber to collect a (very) meager paycheck or who is not there to serve to the best of their ability.

The fact that people can come to the Capitol to petition or redress their government, to 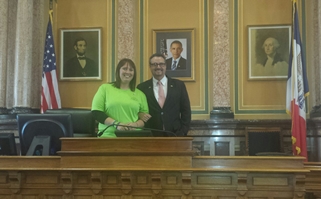 ears that will listen, reminded me of the fundamental concept of our representative democracy.  The Capitol Building is filled with concerned citizens, activist groups, students and legislators who are trying to make a positive difference in our lives.

I have always said that the most elemental obligation of every citizen is to cast informed votes, but my eyes were opened to something every bit as crucial:  the activity of a government of, for and by the People.

Most of us can do far more than argue on Facebook and in bars; we can stand in the hallways of government to make our voices heard.

While every representative was, indeed, thoughtful and engaged, they nevertheless followed their party-line rhetoric.  To the “D’s” this was a can-do initiative, but to the “R’s” there was a wall of “I don’t think we have the money” or “We’ll look at this next year.”

More frustrating were the political procedures that even the representatives themselves admitted created processes of confusion.

“I think this is a Policy Bill and you need to take it to the Senate.”

“This falls under Human Health and Services and you need to go there first.”

“This is an Appropriations Committee bill and we have our budget set.”

“I don’t think we need a committee discussion on this.”

“If we were to put this into our budget what do we say to the myriad other requests that we’ll deny?”

Representative Kressig is not deterred or surprised by any of this.  He knows how, what, where and to whom, we have to maneuver, but it was impossible not to feel, even with the accessibility to the Legislature, that the machinery of politics can leave us out in the cold when their hands are tied by political favors, allegiances and more popular priorities.

The press we’ve received, letters to the editor to papers all over the state, has made us a real story.  Other citizens are seeing the value of compassion that Iowa can afford and that it distinguishes our commitment to the Quality of Life.  And some legislators are coming forward to acknowledge this opportunity to show their constituents that government is not always at odds with itself, and can serve the public good.  (https://news.google.com/news/i/story?ncl=dw0OwKu09TyLR9MTTbAnap6hzugaM&q=sing+me+to+heaven&lr=English&hl=en)

The lesson from this story?

Politics are cold, but people are not.  When people believe in something, whether as politicians or voters, we can make progress.  Budgets, appropriations, committees, alliances, debts and the press are all part of the process, but it is the passion of our beliefs that propel us into action and can lead us toward effective change.