An issue which consistently divides along party lines is social spending.  The position I hear the most from the right side of the aisle is that welfare creates a system of perpetual poverty and that a high percentage of people using welfare are exploiting the system.

The argument they follow is that welfare should be abolished or greatly reduced and that is often married to a belief that the hard earned money of working Americans is being wasted on lazy people.

I saw a letter in USA Today where a family counselor in Texas noted that a family he counsels contains “4 generations of welfare.” His conclusion was that welfare perpetuates the need for welfare.

When the deduction is made that poverty is passed on generation to generation because of a system of sustenance to provide for those afflicted with it, the truth is being missed.  Welfare was never intended to eliminate poverty; it cannot. It is a system created by a civilized society that understands we must create a net for those who have fallen through the cracks.

A child born into poverty may grow up seeing only struggle and that can become the template for their own survival patterns. Their educational opportunities may suffer. Perhaps, the value of education is not realized in ways that many of us can take for granted.

in a neighborhood where their role models have succumbed to crime. Success is measured by different standards when you are outside the system.

What we try to do with social programs, and what can happen (and does) is create resources for hope, so that someone might break that cycle.  Someone who found the right school, or a 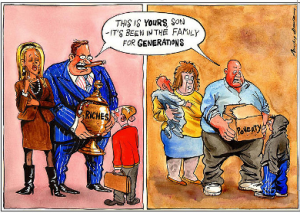 special teacher, or was shown the right opportunity to inspire a break.

That happens only when we cast a safety net that will help to sustain their lives.  We don’t know who they are and so the net has to be wide.  That is the welfare model.

Poverty doesn’t replicate because a social program or service brought some sustenance to the table.  For the record, families that have someone receiving some form of welfare do not produce an inclination by others in the family to work less.

Programs to offer assistance will not end the cycle created by the realities of poverty but they can give many what they need to survive so they can find their way to opportunity.

There are 3 other immutable reasons to improve and continue welfare programs:

1) They keep children from starving, 2) They can bridge the gap between unemployment and employment, and 3) It’s the right thing for a compassionate and civilized society to do.

Our dilemma should not be whether to continue welfare programs, but rather, how do we spend our tax dollars in other places, as well, to reduce the poverty rate and to grow our economy.

On the right is the belief that we should give more to those who own the stores and factories so that they will create more jobs.  A superficial glance at the issue makes that seem logical, but any depth of analysis reveals that’s like giving Gatorade to the team owner when the players are thirsty.  Businesses don’t expand when owners have more money in their hands; they expand when there is demand for their product.

When the consumer class has disposable income they spend it and that’s when the economy grows.

It’s Tricke UP, not Trickle Down. 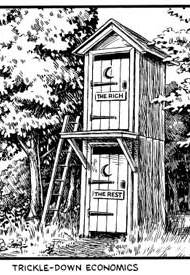 America has the resources to sustain welfare and to create job programs.  We have the solvency to enrich education.  We can also give tax breaks and incentives to businesses because that will stimulate hiring and keep businesses from closing.

There’s no reason to reduce teacher’s salaries and not to modernize schools, as well.  We can afford the infrastructure building and rebuilding that creates jobs.

Education and Jobs. That is the equation to reduce poverty and to grow our economy, and the arguments we’re having about spending should be centered there…and not around welfare. 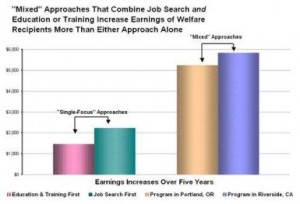