Republicans have voted against Obama’s jobs bill…voted against a Consumer Financial Protection Agency to curb the fraudulent practices that contributed to the recession…voted against a bi-partisan budget…voted against ending tax breaks that did nothing but line the pockets of Big Oil…they voted against the “Buffet Rule” that would essentially lower marginal tax rates but also disallow the loopholes that effectively give the wealthy the lowest tax percentage…voted against the Comprehensive Veterans Health and Benefits and Military Retirement Pay Restoration Act….and look, once again, to 2016 to become a referendum against insuring Americans who couldn’t afford health care…

…and yet they claim to be the patriotic Americans, true to the principles upon which we were founded; a Republic for and by the people.

All of these initiatives intended to improve the economy; to improve the standard of living for the majority of Americans; reduce their risk; reduce the manipulation of stocks; to make taxes more equitable for all of us; improve Veterans benefits; and to give all Americans access to medicine.  However, Republican leadership has convinced its flock that reform is bad for America unless it is to turn policy in favor of the investment class even more.

I’ve heard echoed in the streets, “We have to give the rich incentives, they are the Job Creators.”

It has been clear, however, over the past 35 years that we have been giving the rich incentives.  The upper class have increased their holdings 250% and the top 1% control over 40% of America’s wealth.  And they have the power and the money to influence legislation on every level, and to convince too many voters that they need even more so that they can continue as our benevolent benefactors.

I’ve read and heard comments from people who contend that we don’t want to upset the rich by suggesting that maybe…just maybe…they could afford to pay a little more to pay down the debt…since…well, they benefitted the most from the way things have been…and maybe because some of it was fraudulent (Rigas, Skilling, Lay, Kozlowski, Ebbers, McDermott, Waksal, Madoff, etc.)…and…oh God, I hope I don’t offend anyone…but the average working American has been paying the bill while many have lost their pensions….and…here we go—-couldn’t afford health care….

This is where someone invariably chimes in with, “We need the rich and wealth creation is their incentive- don’t you know anything, Gary??”

Actually, I know very well how the system works.  It’s a Capitalist/Free Market with Mixed Market influence to minimize instability while creating incentives; it sustains with the creation of wealth.  “Job creation,” however, comes from demand from consumers; businesses are created or expanded to meet demands.  No one goes into business to create jobs, in fact, job creation is the last resort as it adds costs.

Nothing sinister about that, it’s just the way it is.

Don’t get me wrong- I love the rich!  Some of my best friends are rich!  Wish I were one of them – but reform isn’t a punishment of wealth and success; it is a stop-gap to protect those who feed the machine with their consumption of goods and services, the working class, so that the system can prosper within a Republic.

What many people have forgotten (or never knew) is that our system of governance is the primary function of this Republic, not our system of economics.  Perhaps, the reason so many Americans are more protective of Capitalism than they are the social and cultural advantages of a representative Democracy may be because they believe our survival depends on economic prosperity while the constructs of justice and democratic social order are not actually…necessary.

But this is where our collective noodle gets fried; the quality of American life, what our military men and women have fought and died for, is our social order and constitutional justice- not the free market.

Some of my critics have said that the rich are going to stop investing if we insult them or hold them responsible to pay a more fair share, and like sycophantic serfs we must acknowledge their great contributions to jobs and the economy.

They are afraid that they will take their ball and go home unless we apologize for suggesting that they have been doing pretty well and that it is time to share the burden.

I’d like to ask a question.  Where are they going to invest?  We’re 25% of the entire world’s net worth.

Are they really going to take their ball, and say, “We don’t want to play with you anymore because you don’t appreciate us!”?

No. I’m pretty sure they are going to stay right here and keep making money. Some will continue to belly ache because they know they can convince enough people that they are the “victims” rather than the winners in this market, but no one is going to pass on the endless opportunities in America to increase their wealth.

The budget, the debt, debt celings, fiscal cliffs and sequestration have been excuses to convince a frightened public who experienced a deep recession leading to job loss, loss of income and investments, that we need the Supply-Side (Trickle-Down) economics back at the helm…the policies that emptied our pockets in the first place.

Nothing illustrates this paradoxical policy paradigm better than the Fabulous Koch Brothers, with 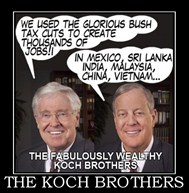 a combined wealth of over 50 billion dollars, who released a commercial denouncing social services.

They proclaim that a salary of $34,000 a year puts a person among the wealthiest 1% in the world (which is as logical as saying that between me and Bill Gates, we have over 40 billion dollars!).  The Koch’s are saying that we don’t need food stamps and a minimum wage because Americans are already better off than most of the world.

“We’ve got to clear those out,” they said, “or anything that reduces the mobility of labor.”

If they were being genuine they would have added: “Or anything that keeps us from getting richer.”

What is at stake here is more than economic policy differences, but the very foundation of freedom and liberty as championed by our Great Charter.  We cannot allow for policy to be purchased.  We cannot tolerate living in a plutocracy where justice, opportunity and freedom is meted out according to wealth.