My father was a child of the Great Depression.  He grew up in a family with 7 children in an abandoned caboose with no electricity or plumbing.  He had only had one pair of overalls and ratty old shoes to wear to school every day.

It was, after all, the Depression and everyone was poor in the dusty town of Sterling, Colorado, but even among the poor, no one had less than my father.

He was teased for his clothes, his lack of decent shoes and his unkempt appearance.

His mother and father did what they could for 7 children and saw that everyone attended school, but in the midst of a depression it is hard to improve your situation once you are destitute.  They couldn’t afford new clothes if they were to put food on the table.

My father told me a story about his childhood just before he died years ago.  He told me how jealous he was of other kids at school who got Tom Mix 6-guns for Christmas

or any of a variety of toys that were popular in the 1930’s;  comic books, tinker toys and train sets.  Such things were a far off dream for my father.

Then one day on a lonely walk home he found a stick.

It was a perfect stick; long and straight.  The stick became a rifle, it was a divining rod, even a magic wand.  It became his only toy and it captured his imagination.  So, he took it everywhere; to school, to the supper table, even to bed.

Being the kid with dirty overalls, worn out shoes, and living in a broken down caboose, having a stick for a toy didn’t improve his status.  It was something more for which to be ridiculed.

And so, he told me, he began to “hate that stick.”

He hated that it was all that he had.  He hated the poverty that it reminded him of; it was everything that was missing in his life, his family’s life.  It represented the undoing of the promise of America that was called the Great Depression.

“Until, one day,” he said wistfully, “when I lost that stick.”

Suddenly, it was gone.  That stick he hated had nevertheless been all that he had.  Beyond its scorn it contained hopes and dreams.  It was an inanimate friend that never let him down.  And now that wooden companion made magical by it’s perfect form, that he alone could transform into anything, had disappeared.

And he cried and cried…and cried.

My father was not a story teller.  He never tried to tie a bow around his stories.  He didn’t put much credence into nice resolutions with moral lessons.  His story ended there.  That was my father; he knew that his true to life parable had a point and that it was up to me to find out what it was. 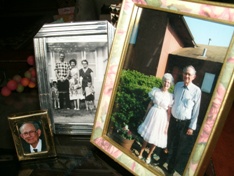 I was mesmerized by the vision of my father as a poor boy with nothing.  The man I knew was always strong and success radiated from his unusual intelligence and unwavering commitment to giving his family a home that was safe and sound.

I saw that stick as vividly as the table that separated us.  I knew instantly what that stick was meant to tell me.

Don’t measure your life by what is missing from it or has yet to be fulfilled.  Instead treasure what is in your hand.  It may be lost someday, and you may discover…that it was the most valuable thing you could ever call your own.

As we argue our differences over budgets, welfare spending, taxes and health care reform, let’s remember what we share;  a legacy of life and liberty.  And we have the opportunity to enrich one another in our own pursuit of happiness.

Let us remember to treasure what we hold in our hands.