Sometimes something will circulate on the internet or pass around as a mass email that will catch my attention and I will feel the need to respond.  When it is something that I believe to be dangerously false or propagating a destructive myth, I will send a “Reply to All” message back to address some of the fallacies.  Sometimes things are sent to me that I find so aggravating that I will go through it line by line, offering my perspective to each.

They aggravate me because they represent the dysfunction in our national debate as they fan the flames of adversity with misinformation.  And a false premise becomes the gospel of erroneous ideology.

This came to me in an email from two different sources in the span of only 24 hours.  In bold print are the statements that were made in the email, and in italics are my responses.  Let it also be made clear that I do not believe that America should become more “socialist” nor do I identify with Democratic Socialists.  What I do understand, however, is their historical and philosophical context and I am willing to defend social justice.

The email was titled:  7 Conundrums of Socialism in the United States of America:

Independence refers to the unalienable and equal right of human beings to pursue life, liberty and happiness.

It was derived from the Massachusetts Constitution which reads:  “All men are born free and equal, and have certain natural, essential, and unalienable rights; among which may be reckoned the right of enjoying and defending their lives and liberties; that of acquiring, possessing, and protecting property; in fine, that of seeking and obtaining their safety and happiness.”

What it does not mean is what the above phrase implies; that social equality means that every person is of equal ability, equal talent or intelligence and will be given equal reward.

2) America is capitalist and greedy – yet half of the population is subsidized.      The “subsidizing” of people who have fallen through the cracks and the Capitalist economic system in America are two different things.  Social programs are not a gift from Capitalism, but are, rather, the demands of a government of, for and by the people.

Capitalism is not a moral construct, nor is it a form of public governance; it is an economic paradigm in which there will necessarily be failure as well as success.  A moral society, however, demands that its government provide for the malfunction of an imperfect system.

3) Half of the population is subsidized – yet they think they are victims.            Such a dismissive statement isn’t worth the time I’ve already spent writing this sentence. When someone writes such a thing are they saying that people on welfare have it easy?  That they want to be there?  That they enjoy having little?

Myriad reasons can lead to poverty, from being laid off to sickness, either physical or mental.  Or from the pathologies of poverty that can be imprinted generationally or environmentally, where survival is learned from a perpetuating system of struggle.

If you think the “subsidies” are so great, try living on them.

4) They think they are victims – yet their representatives run the government. This statement is nothing short of delusional.

5) Their representatives run the government – yet the poor keep getting poorer.  Actually, the poor are not well represented in government.  That is why for over 35 years the system has been rigged in favor of the well to do who have paid for our government to look after their interests.

The wealthiest Americans increased their holdings 250% over those years while most Americans saw flat or falling wages when compared to rising costs of living.  The poor have gotten poorer precisely because the rich have gotten richer.

Think about it!  That pretty much sums up the USA in the 21st Century.  Makes you wonder who is doing the math.  These three, short sentences tell you a lot about the direction of our current government and cultural environment:

For the record:  I have never heard anyone say that all gun owners should be judged as murderers.

The comment that the hungry and poor have paid no price for the benefits they receive says more about the intent of this series of statements than any rebuttal I can make here.  I am so grateful that my own sons are being raised with a conscience that cares for others.

The latter part of the statement is a myth, because undocumented immigrants are not eligible to receive any “welfare” benefits.  In many cases even legal immigrants are restricted in the benefits they can receive.

In conclusion, I will bookend this post with the words of Thomas Jefferson:     “Whenever the people are well informed they can be trusted with their own government.”

Of course, that means the reverse implication of Jefferson’s wisdom is equally as true. 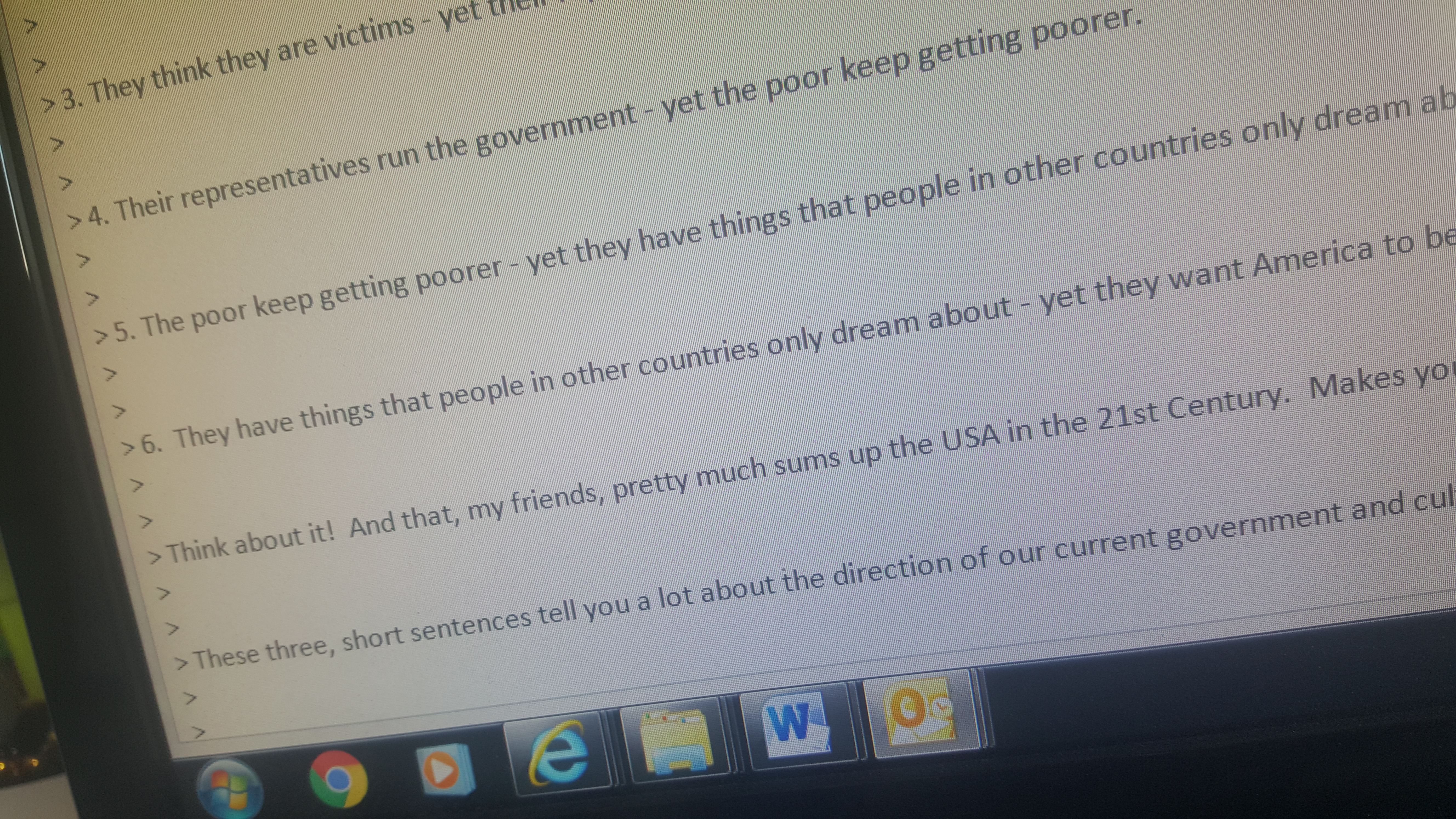 If people are not well informed, they cannot be trusted.

This email that is circulating is not well informed.