A recent poll said that 43% of the Democrats polled in Iowa identified themselves as “socialist.”  I find that a bit suspect and alarming and it has stirred controversy among Democrats and Republicans, alike.  Democrats who don’t want to identify with socialism and Republicans to fan the flame that Democrats want to take America toward Marxism.

The problem with the “Socialism” label is that it’s just that: a label.  Without delving into the meaning, it is nothing but a word to distract us from a discussion that America needs to have.

The literal definition of socialism is a set of social and economic measures, policies and systems characterized by social ownership and democratic means of production.  “Social ownership” may be public, cooperative and citizen ownership of equity.  In a representative Democracy, such as ours, equity can be interpreted as a fair distribution of resources in the best interests of the people, or the Common Good.

So, what does socialism mean, exactly, in the context that Bernie Sanders and many Democrats are supporting?  It’s important to understand because that label is going to be hung out to dry throughout this entire election season, and Sanders is going to either rise or fall because of it.

Here’s a look at the history of social democracy in America….

We may as well begin with none other than George Washington.  Washington (who was non-partisan) believed that broad-based worker ownership would ensure “the happiness of the lowest class of people because of the equal distribution of property.” Washington even gave tax incentives to New England fishermen to rebuild their fleets after the Revolutionary War on the condition that the captains and the crew sign contracts ensuring broad-based profit sharing among all workers.* 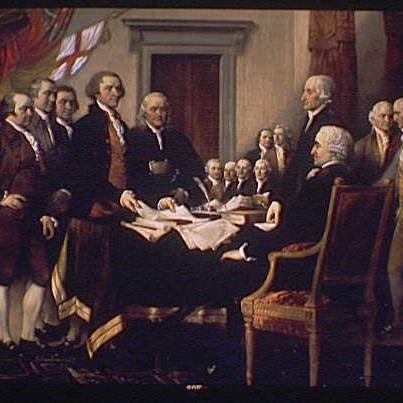 James Madison wrote that “the owners (the People, themselves) of the country itself form the safest basis of free government.”  He also stressed “the universal hope of acquiring property.”

Thomas Jefferson wrote to Madison that “legislators cannot invent too many devices for subdividing property.” Jefferson secured the Louisiana Purchase to allow for more land ownership by citizens.

John Adams, our preeminent Federalist (a title he disliked), favored “preserving the balance of power on the side of equal liberty and public virtue (by making) the acquisition of land easy to every member of society.” Land being the most valued currency of the time.

Make no mistake, these are government land grabs, parceled out to the people.

Even, Alexander Hamilton, the favorite of the money-class, argued that few people wanted to be wage laborers only, and he believed that a strong middle class was, thereby, the mechanism for mobility. Our founding fathers believed that democracy would work only if citizens had an ownership stake in the economy, and they feared that property inequality would prevent America from fulfilling its promise.*

Henry Ford echoed Alexander Hamilton 120 years later as he modeled the Ford Motor Company on his belief that a strong middle class was needed to become “energetic customers of businesses in the entire economy.”

100 years ago, iconic Republican, Theodore Roosevelt, ran on his Progressive Party platform, titled “A Contract With the People.”

Mainstream Democrats and Republicans considered this a dangerously socialistic document. The party’s call for social reforms included:  A National Health Service; social insurance, to provide for the elderly, the unemployed, and the disabled; a minimum wage law for women; an 8 hour work day; a federal securities commission (to rein in Wall Street malfeasance); farm subsidies; and worker’s comp.

The Progressives advocated for what were considered left-wing, socialist, ideas like women’s voting rights, and strict disclosure on campaign contributions. The main theme of the Progressive Party platform was to challenge and reverse the domination of politics by business interests that Roosevelt believed were controlled by both established parties.

The platform specifically stated that their purpose was to “destroy this invisible Government, to dissolve the unholy alliance between corrupt business and corrupt politics is the first task of the statesmanship of the day.”**

Now…let’s catch our collective breath. How different is any of this from what Senator Sanders is saying today?  That is the breadth of the “socialist” label that he affixed to himself and is being bandied about by everyone, from supporters to foes.

A representative Democracy, or the Republic, for which we stand, is predicated on the

premise of a government of the People.  Our venerable Constitution begins, let’s not forget, with “We the People…” and not “We With All the Money….”