I saw a poll among voters that concluded that President Obama has been the worst president in post-FDR history.  They ranked President Reagan as the greatest.  It isn’t hard to dismiss this sort of faux-information as meaningless, given the fact that The Kardashians and The Bachelor continue to get high ratings, but I must admit that a wave of dark energy coursed through my veins. 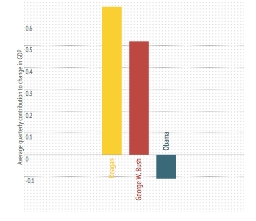 unemployment is below where it was when the recession started (in spite of the obstruction of a jobs bill), and how deficit spending is down.

I want to remind America, even those who have believed the budget alarm rhetoric, that more Americans can live without the fear of losing everything due to illness.

Then I want to show them stock market graphs, deficit gaps and unemployment figures from 2001 through 2009 and ask them again:  “Who was the worst president?”

But…I’d be wasting my time.  Fox News reaches them, too.

As troubling to me as the Obama-fail in the poll was the Reagan-canonization.

The Legend of Reagan not only endures but grows, as he now stands neck and neck with Abraham Lincoln as The Great Emancipator; taxes versus slavery.

It grows because the Republicans have not had a legend since Lincoln.  They marginalized Eisenhower during his presidency of prosperity because America had also moved to the left, post World War II, and Republicans created a more extreme ideology in order to define some relevance; ergo the second Red Scare, McCarthyism, the emergence of Goldwater conservatism and finally the great alliteration himself: The Ronald Reagan Republican Revolution.

I can admire Reagan as a great communicator and his brilliant media presence that still inspires people and policy around the globe; his televised indignation toward communist repression resonates to this day.  Love him or hate him, he was a galvanizing figure in history.

I will never forgive his inaction toward HIV/AIDS after 48,000 vibrant American men and women had already died by 1987.  Hindsight reveals that Reagan, himself, may have been sympathetic to the gay community, but his staff had nothing but animus for homosexuals and I remember my anger, as if it were yesterday, as friends and colleagues died, and the gay community pleaded helplessly to his administration for action.

Reagan’s lasting legacy is not about social awareness, however, it has been of economic success and this is where I want to shed some revealing light onto his “greatness.”

I contend that it is a myth; a fable; a story woven from selective memory in order to put a noble face on failed policy.

In 1980 (Jimmy Carter’s last year in office) inflation averaged a very high, 12.5% and America was heading into a recession.  Carter’s failed economic policy was the perfect platform for the Reagan myth to begin.  Reagan immediately implemented supply-side economic policies which meant tax cuts across the board and expanding the tax base to offset revenue loss.

“Reaganomics “now entered our lexicon and certain economic indicators began to improve quickly.  During Reagan’s administration, the unemployment rate averaged 7.5% over his eight years after reaching a high from the recession in 1982 of 10.5.

Reagan’s legacy was already set halfway through his first term because he was the man who lowered our taxes and turned the tide of a recession.  Production was up, unemployment was down, Mount Rushmore can’t be far behind!

But, there was a virus deep within Reagan’s great plan.  There wasn’t enough revenue to pay for his defense initiatives and for the government programs that he supported, so along came…the Tax Equity and Fiscal Responsibility Act of 1982; the largest peacetime tax increase in history.

And here’s the caveat that made him the Greatest Showman on Earth- while tax burden increased on the Middle and Lower classes by eliminating breaks, he sold the need for fiscal responsibility to the general public with a brilliant aw-shucks approach that furthered his legend as the Patron Saint of Tax Relief.

He then sold the Tax Reform Act of 1986 which “simplified” the tax code while raising the bottom bracket tax rate by 4% and lowering the top another 22%.  In theory, he could say that they were tax cuts, since the total percentage was lower, but tax burden fell to everyone but the wealthy.

Because I actually have an interest in fairness, I must point out that these Acts were bipartisan; Democrats were on the Trickle Down Train, as well;

further proof of the historical journey toward oligarchy that has seen a 250% increase in the holdings of the upper class over the past three decades.

Again, my interest is in truth and it must be said that the widening gap between the rich and poor had already begun during the 1970s before Reagan’s economic policies took effect, however, it must also be stated that Reagan’s policies exacerbated that trend.  When Reagan left office there were 7 million more Americans living in poverty than when he started.

Reagan remains popular as the anti-tax hero despite raising taxes eleven times over the course of his presidency, in the name of fiscal responsibility.  Overall, the 1982 tax increase undid about a third of the 1981 cut.

Economist Milton Friedman argues that Reagan’s tax policies were the stimulation to our economy that created the economic boom of the 1990’s, but others like another Nobel Prize winner, Robert Solow, argues that the deficits were a major reason why Reagan’s successor, George H. W. Bush, reneged on his campaign promise “No new taxes” and ultimately raised them.

Even Reagan opined that his greatest regret was having tripled the debt and having turned America into a debtor nation for the first time.

My take away is this— Reaganomics were a short term fix with long term, negative, consequences. Republicans today can cite the fact of an economic recovery in the 80’s because of neoliberal economics (Supply-side; Reaganomics), but they step over huge canyons of shame such as fiscal disaster, increased burden on the Middle Class and the poor, and ultimately even a recession after his second term.

What the neoliberal economic movement (don’t confuse neoliberal economics with social “liberalism”) did was use the concept of tax cutting incorrectly.  Lowering taxes does stimulate spending and the precedent for how its done was set with President Kennedy.  Reaganites turned a blind eye to Kennedy’s reform that worked (because it was, after all, progressive) and they continued, instead, with supply-side economics.  They contended, and still do, that the more money the wealthy can keep, the more they will benefit the rest of us.

Kennedy also cut marginal taxes, and the largest percentage decrease was from the top, but he reformed tax burden by eliminating loopholes for the top tier and by giving breaks to the bottom tier.  It was REVERSE Trickle-Down; give continued opportunity to the base to increase their holdings and they will spend money, which creates more opportunity for wealth at the top.

So, revere Reagan or hate him…or you can be like me; respect his talents and accomplishments while disliking many of his policies and mistakes.  The proof of his successes and failures are in our real history, and they will not be revealed by polls, party rhetoric or platitudes; they are there for serious minded people to view and decide for themselves.

Greatest president since FDR?  Depends on your income.