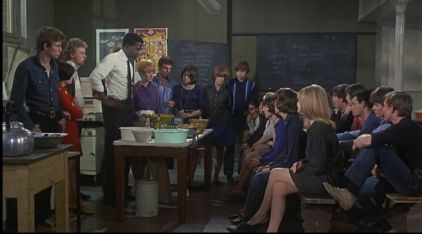 In a never ending quest to bridge ideological differences between Democrats and Republicans (and Independents and Libertarians), I consistently engage in conversations with people with whom differences exist. If I have any trait for which I may be uniquely suited as a representative, it is that I welcome such engagement.  And it is with a genuine purpose to reach understanding.

This leads to a lot of anecdotal evidence, and I’ve even been criticized for my posts that begin with, “I was talking to a Republican friend the other day…” but that is criticism I gladly accept. I believe that it is from real interaction and not platitudes from slanted media or party doctrine, that we can glean the truth.  So….

I was talking to a Republican friend the other day…

And we were talking about education. His position was that we spend enough of our budget on education (“It’s the biggest percentage”) and he’s tired of hearing about how we don’t have enough money for teachers and programs when he’s “paying for professors who take the summer off and teach only 15 hours a week.”

(By the way, I have his permission to share this story)

“I don’t mind paying taxes,” he told me, “but I do mind paying for things I shouldn’t have to.”

That last statement said a lot. First of all, I agree 100%.  I want the same value for every dollar I pay in taxes as much as any Republican or Libertarian.  Truth be told, so do most Democrats.  The question is:  What should we pay for and when are we paying too much?

Easy question to ask, but if it were easy to answer, Congress would be toasting each other across the aisle rather than sit-ins, government shut downs and unscheduled vacations. Even when we consider all of the gradations of party affiliations like Libertarians, Independents, the Green Party or the Tea Party, what our conflict boils down to is what criteria do we use to examine evidence, and at what point are we convinced that we have enough information?

Again, easier said than done. My friend pointed out that our education budget is inflated because of the salaries of college professors, “protected by unions” who “often put in less than half a normal work week” and take the Summer off while “still getting paid well above what such a schedule should allow.”

“I don’t accept that teachers have to be laid off,” he continued, “or that classes have to be cut, because the Iowa Legislature approved only a 2.25% increase rather than 4%. That money is just going to salaries.”

We were in the company of others who all agreed with his statement.

“Well….” I said, “I believe that you are determining your policy based on a myth. A myth that is being perpetuated within Republican ranks by conservative media.  From my view, it is created to diminish the value of education, in general.”

I knew that I was going to get a reaction that was less than positive, but I was telling the truth as I saw it.

“Then why is Iowa ranked in the middle,” I asked, “and in some studies toward the bottom in several measures of education where we used to lead the nation?”

His answer was swift. “Because we are allowing for substandard results, and letting bad teachers continue to teach because their union protects them.”

Not a drum beat that I haven’t heard before.  My mother was a teacher, many of my friends are teachers, and so this is territory in which I am not unfamiliar.

“Okay,“ I said, “let me tell you what I know. Most teacher salaries do not keep pace with inflation.  One of my college professor-friends works at another job all summer simply because of the fact that her salary does not pay all the bills.  During the summer, she, like many others, takes classes to improve her knowledge in her field, in order to continually improve her curriculum.”

My friendly adversary smiled (was not convinced), and asked if we could continue this at another time, as we were both on our way to other functions.  I told him I would and today I emailed him my thoughts:

each class. They prepare lessons, grade papers, counsel students, stay after school tutoring those who are struggling, and also keeping up with meetings and myriad activities required by an institution.  Offhand, I’d say those ‘low hour’ teachers are putting in 20% more time, year ‘round, than the average full time worker.  That’s not to mention the research that is required by a university.  Research incumbent upon them in order to keep their jobs, but also that’s critically important work in the broad scheme of improving society.

The average salary for a college professor in the U.S. is just over $70,000 annually. Nothing to sneeze at, but not exactly inflated.  K through 12 is around $40,000.  When compared to real hours dedicated to their students and schools (not the ‘myth” of sabbaticals in the Bahamas and diminished hours during the day) they are being grossly undervalued.

In Iowa, first year teachers are paid below the national average. I know of several young graduates from UNI who have left the state for better salaries in Minnesota and elsewhere.  How do we compete if we do not retain, or even attract, the best new teachers?  How does America compete globally if we don’t start with the teachers themselves?

And if it’s economic impact that concerns us the most, a Stanford University study concluded every excellent teacher (determined as above average by a defined criteria) raises each student’s lifetime earnings by $20,000. If there are 20 students in one class, that is $400,000 more generated income. If that seems like small potatoes in an individual sense, consider that there are 21 million students in America. That’s 420 billion dollars.

What is imperative is to listen to the teachers themselves who are saying that they are not getting the funding for the tools, and to retain the teachers and classes, that give our students the best advantage.”

I immediately received an email response and it was short and direct, but also respectful:

“We can agree to disagree. State government is wasteful in many ways and I can point to several cases where funds were allotted to various institutions that simply inflated salaries.  I simply cannot absolve government when it comes to oversight and spending our tax dollars the most efficiently.”

On that, I do not disagree. And from here, maybe we can build a consensus or coalition or even re-evaluate some ideas.  At the very least, we can continue a respectful conversation.

And at the beginning, in the middle and at the end of every worthwhile exchange, there will be education.…maybe, that’s what we need more of, in general.