My oldest son, who is now 17, likes to talk politics now and again.  I love that he is showing interest in what has been his father’s passion, and he has been coming to the table with his own ideas.  Occasionally he will come right out with what is on his mind.

“Well…um…someone said that about you…” and he trailed off.

It’s hard enough to discuss politics and actually get anywhere but when you have to completely correct perceptions of your position before even making your case, it can become nothing but an exercise in futility.  But, this is my son, for whom I have the patience of Job.

The truth is, my son’s comment is something that I’ve heard before.  It comes from a misperception that Democrats, a) Don’t like big business, b) Don’t like the rich, c) Don’t like wealth accumulation or success, and, d) Want a Communist distribution of money earned by the wealthy.

I also don’t know anyone who doesn’t enjoy money, or who wouldn’t like to have more of it. In fact, I know a lot of very wealthy Democrats and they aren’t embarrassed, nor do they feel that they don’t deserve what they have.

Big Business creates 50% of America’s Gross National Product.  It employs nearly half of all working Americans and when you consider that small business comprises 99% of all businesses; one can easily see the relevance of big American corporations.

No one wants to impede their success because it benefits all of us.  What we DO want to pay attention to, however, is HOW they succeed and we want to keep the power afforded to wealth balanced with the interests of the public. 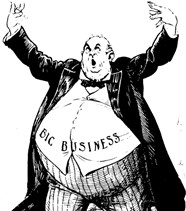 I’ve heard or read so many blanket criticisms of the Occupy Movement, for example, from people who dismiss the cause as “hatred of success and American business.”  It is not.  It is hatred of unfair pandering and greed which compromises the wealth and the success of most Americans.

It was (and remains) a protest against cronyism and bailouts of financial institutions whose unscrupulous tactics to amass wealth contributed heavily to the collapse of our system.  That collapse resulted in a lot of Americans, who didn’t wield influence, to lose their savings and pensions (and jobs).

So, I’ve come back to where I always come back; a wish for more truth in our arguments.  If I am accused of “hating the wealthy and big business,” then I have to spend too much time correcting that fallacy before I can even get to a rational and factual debate.

My son and I are fine and he benefits by learning early in life how truth and rhetoric are not necessarily joined in Holy Matrimony. 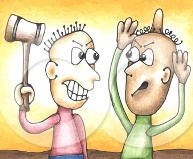