Over the years I’ve heard opponents of social spending say, “If I were taxed less, I would give more generously to charity.”

On the surface, at least, that statement seems to have some validity.  I am privileged to host several fundraisers every year, helping to raise money for everything from the United Way, Habitat for Humanity, MDA, Family Children’s Counsel to local hospitals and schools, and I am always pleased by the generous turn out of this community’s citizens, many of whom are Republicans, who favor tax reductions.

Democrats attend, as well, of course, but I consistently count on reaching out to Republican friends and they rarely disappoint.

Nevertheless, the statement, above, is something that I hear with regularity and it begs for an investigation.

Could federal spending be reduced, by reducing taxes and thereby allowing for more personal charitable giving to care for those in need?

It would seem logical, if that’s true, that as taxes have systematically decreased since 1959 that charitable giving would go up commensurately.  And it has…except not with Americans who have seen the greatest decrease in their federal taxes. It has among those who can least afford to give and whose taxes have been reduced less dramatically.

The Independent Sector, a nonprofit organization focused on charitable giving, found that households earning less than $25,000 a year give away an average of 4.2 percent of their incomes; those with earnings of more than $75,000 give away 2.7 percent.

Paul K. Piff, a Ph.D. candidate in social psychology from the University of California, reaches the same conclusion that “lower-income people were more generous, charitable, trusting and helpful to others than were those with more wealth. They were more attuned to the needs of others and more committed generally to the values of egalitarianism.”

There is a more basic issue underlying charitible donations, however, than percentages. Charities have long known that donors give to charities with which they identify and from whom they might expect a more direct return. While the poor give to organizations like the Salvation Army and to their church, wealthy Americans tend to donate to the arts and humanities and to organizations where only about 10% is directed toward the poor.

Furthermore, most charities are localized and reflect community values and interests; wealthier communities get more substantial contributions than poorer communities, not in terms of percentage of local incomes, but in total dollars.

Marvin Olasky, the conservative author of “The Tragedy of American Compassion,” concedes that the federal government is more efficient at handling national economic disasters (Depressions and Recessions) but argues that in “a normally functioning economy, charities are sufficient to handle the everyday poverty…”

This, however, is not true when you look at the micro economic picture. Challenges can arise in any economy and can affect one region more than another, and poorer communities will have less resources for charity.

For reasons due to changes in local industry or natural disasters, certain areas can attain higher unemployment and economic devastation, and if that area cannot generate dollars, poverty grows, crime rises, education suffers and a new self-perpetuating cycle of depressed living occurs.

In theory, it is the Federal Government, the blind arbiter of social and economic justice, that steps in to help where the private sector cannot.

A little math reveals that Americans would have to give 10 times more than what they are currently offering to charities to replace what is spent on social welfare and relief programs, and if we are to continue to use logic, there is no reason to believe that people who hate paying taxes would increase what they currently donate in order to compensate.

As the late Senator Daniel Patrick Moynihan once said, “There are not enough social workers, not enough nuns, not enough Salvation Army workers to care for the millions of people who would be dropped from the welfare rolls” without government subsidized programs.  What’s more, private charities often spend up to 90% of their revenues on administrative costs.  By contrast the federal government is held to strict accountability standards and transparency.

Tax rates for the wealthiest Americans have dropped from nearly 90% during the Eisenhower administration to 36% today, yet their percentage of private charitable giving has 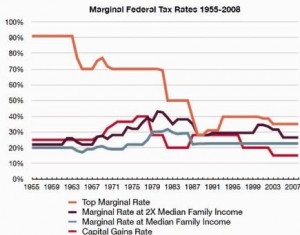 remained steady at 2% of their income.

Whereas for the rest of us, our tax rate has always been about the same, hovering in the 20’s, while our charitable giving has risen to nearly 3% (over 4% from the lowest earning Americans).

Many people (rich ones anyway) argue that 2% of a million dollars is a lot better than 3% of 40,000, but there is an important part of that mathematical justification they are leaving out.  While headline grabbing donations like the $100 million, billionaire Steven Schwarzman, commited to the New York Public Library might make an argument regarding what income bracket gives the most, such mega-gifts translate into less than one and a half percent of overall donations, according to Giving USA.

Rather, it’s the smaller donations by hundreds of millions of non-billionaire Americans that fuel most of the nation’s nonprofits (individuals account for about three-quarters of donations).

I do not mean to belittle the compassion of those who attend and give to charities, and I am eternally grateful to those in my community that I see, event after event, giving generously, whether Conservative or Liberal. The argument I am making is that the relatively small amount taken from our taxes and spent by the federal government to bridge the unavoidable gap between private giving is neither the enemy of our household budget nor of our economy.

I hope to offer some perspective on the truth of giving.

“There is no sweeter pleasure than to surprise a man by giving him more than he hopes for.”  – Baudelaire