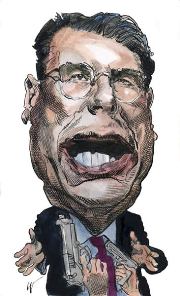 Executive Vice President of the NRA, Wayne LaPierre, stated that government should not interfere with our right to possess guns to defend our homes and protect our children.

It’s such an appealing statement.

The “right to defend our homes and protect our children.”  It makes us feel like warrior-kings protecting our domain with bravery and nobility.  It erases any question of strength and replaces timidity with fierce, unquestionable valor.  It’s so easy to support that claim because it is shorthand to understanding our paramount purpose:  The protection of children.

So why would anyone ever doubt its sincerity?

The proliferation of firearms is less about protecting our families than it is about America’s love of lethal force.

Guns shoot things.  They are powerful, yet contained within our grasp to become extensions of ourselves; they make us almost super human.

They are sculpture.  Whether entirely metal or a combination with polished wood, they are curved, angled and sexy.

They are a culture unto themselves.  With guns come ammunition, clothing, sports, and clubs.  There is no “gun,” there are “guns.”  Like automobiles, comic books, figurines, and trading cards, guns are collectibles that come as pistols, revolvers, bolt action rifles, carbines, shotguns, machine and elephant guns.

They are single barreled, double barreled, long and short.  And they all have a function:  To take out, take down and obliterate whatever they hit.

They can be used for hunting, target shooting, military defense, personal protection, and murder.  I’m confident that no one reading this is promoting the last entry, but it’s a reality of guns.

Personal or family protection is the pivot point of the gun argument, but, if anyone is serious about protecting their families they should be sobered by a study from Emory University.  It determined that the likelihood of a killing occurring in homes that have guns nearly triples.

They should be even more concerned by a survey conducted by the Archive of Pediatric and Adolescent Medicine that shows us that 40% of the children in homes with guns know where the guns are stored.  20% of those children have handled the guns without adult supervision or even knowledge of the handling.

I lived in Chicago, New York and Los Angeles for 27 years and never needed a gun. And I hardly lived an isolated life in upscale neighborhoods.  That’s not to say that bad things don’t happen where a gun could be used for protection, but why does a guy I know living in Iowa need an AR 15 under the bed and a handgun by the nightstand to feel safe?  Especially when you consider, according to that same Emory University study, 77% of those killed in their homes were murdered by someone they knew with no signs of forced entry.  Strangers account for less than 4% of the murders.

If protection is what anyone is seriously concerned about, they should be an advocate for sensible gun legislation, because the truth is that the possession of guns increases the risk of someone you love being injured or killed by a gun.

There just might be safer ways to protect your family.

I can argue until Ted Nugent joins Greenpeace what I believe was the true intent of the 2nd Amendment, but I will acquiesce to the fact that words are there to create an argument for private ownership of firearms.  But, that doesn’t mean that I’ve put logic and sanity off to the side; quite the contrary.  That “right” demands sane and logical regulations that evolve right alongside the evolution of firearms.

If you are a law abiding and responsible gun owner- no one is coming for your guns.  But don’t hide behind a deceptive belief that you are really protecting anyone.  Be honest.  You love guns.

For information regarding violence and guns, www.bradycampaign.org, has compelling statistics.