As events in the Middle East cause alarm with regard to where American policy in the region is headed, it is important to consult sources outside of our own media to reach a better understanding of counter perspectives.  That does not betray American interests and the safety of our citizens, it is, rather, a more effective path toward finding peace.  We can point to the Islamic Revolutionary Guard Corps and its Quds Force, led by Qasem Solemani, and justify the killing of an anti-American aggressor, but the matter of peace among nations is often misled by leadership.

A nation is comprised of people, not just tyrants, demagogues, religious leaders, or duly elected representatives.  It is the pulse of people with their families, working, and raising children, that reveals the truth of a nation’s interests.  That recognition does not deny persecution and discarded human rights around the world, but if we believe in justice then we must believe that it is an inalienable right; it must be absolute.

And so with that in mind, I Googled “Iranian perspectives” and I found countless articles and blogs.  I was particularly drawn to this one:  http://iranian.com/main/blog/ayatoilet1/iranians-love-america-americans-hate-iran.html

While that is a purely anecdotal perspective, it is also,

undeniably, a point of view that runs contrary to the perception many Americans have of Iranians.  I was struck by the premise: “When Iranians burn the American flag in street demonstrations – they are NOT showing hatred toward Americans; they are, in fact, pointing out the U.S. government has and is continuing to try to destroy Iran and Iranians.”

Another article supported the blogger’s distinction between the American people and government:  http://www.npr.org/templates/story/story.php?storyId=89683583

Many Americans are of the mind that it is good policy to condemn Iran with military intervention, but from the Iranian perspective, a mistrust of American policy is not only warranted, but well advised.  We are only one generation removed from a covert American operation in 1953 that imposed a coup d’état and deposed their popular prime minister.  The coup was to secure oil interests for the United States after Prime Minister Mohammad Mosaddegh had nationalized Iran’s rich petroleum industry and oil reserves.

The Shah of Iran, Mohammad Reza Pahlavi, became a puppet of the United States, while subjecting his own people to arbitrary arrests and torture.  While the Shah lived as a monarch, the people were kept poor by this alliance.  This led to the 1979 Revolution led by the Ayatollah Khomeini, and thus began the Islamic Republic.

Relations with the United States continued to fester as the US supported the corrupt regime of Saddam Hussein during the Iran-Iraq war; again to secure our own interests.  Over a million Iranians died in that 8 year war with Iraq.

The nuclear agreement President Obama orchestrated with Iran was not going to be a simple, quick, fix, it was only part of a modern transformation.  Extreme Islam is a reaction to that change, but change is also where new alliances were formed.  Iran has shared the fight against ISIS, and while Israel is uneasy with a solvent Iran, the agreement over time could have been a step toward breaking the stalemate with the Palestinians.  An agreement (perhaps a two state solution) is what will hold serve in the inevitable Middle East transformation.

It is true that Tehran supports Hamas and Hezbollah and has not recognized Israel since the Islamic Revolution in 1979, but my belief is that peace for Israel requires a framework that extends beyond her borders.  The Obama-era agreement was also for the people of Iran who also wish, believe it or not, to live in peace.

One side of the debate in America believes that Iran must be treated as our enemy and anything short of military annihilation of nuclear facilities (including power) and continued economic sanctions so that Iran’s ability to rebuild them is rendered impossible, endangers us all.  Inflammatory comments from the Ayatollah easily verify that position for many.

Another side believes that Iran is a sovereign nation, and like the blogger points out, a proud nation, that suffers under economic sanctions.  They believe that the pathway to 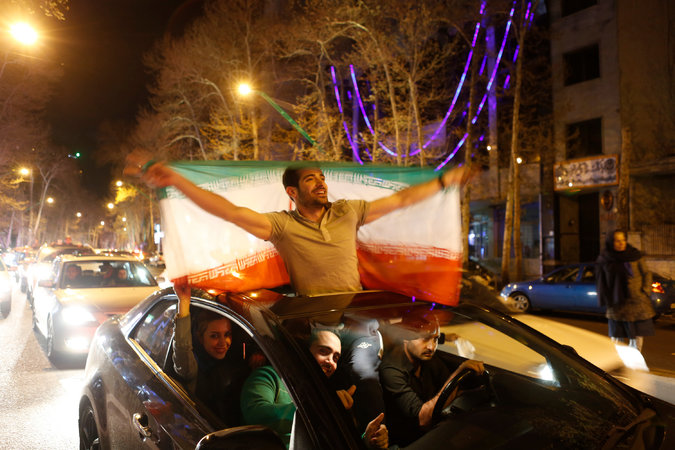 peace is to restore economic solvency and salvage their national pride by acknowledging that sovereignty.  The agreement, maligned by many conservatives and thrown out by President Trump, specified that only after creating strict parameters on Iran’s uranium stockpile (reducing it by 98%), destroying centrifuges and submitting to expansive inspections to insure that no military nuclear development is possible, will sanctions be released.

Sanctions caused Iran’s oil exports to fall by two-thirds, their GDP plummeted, inflation rose over 40 percent, and the people struggled to buy necessities.  Unemployment skyrocketed, and foreign investment disappeared.  The lifting of sanctions from abiding by the agreement reopened Iran’s ability to export worldwide and allow its banking system to do business with Europe.  They would be integrated back into the world economy.

David Rothkopf wrote in Foreign Policy Magazine (July 20, 2015):  “Make no mistake, this deal is just the latest in a series of seismic shocks that are remaking the modern Middle East. Some have been generational. Some have been technological. Some were manifested in the Arab Spring….Some came with the evolution of the extremist threat from al Qaeda, to the Islamic State, to whatever comes next. Some are unique to the massive changes taking place within individual countries — from Israel, to Syria, to Libya, to Yemen, to Iraq. But all are part of this being a transformational moment, and all will be impacted by this deal and its consequences, intended and otherwise.”

I don’t believe that the inflammatory statements from Ayatollah Khamenei can be ignored, not by any means, but we must put him into context.  He condemned 9/11, his foreign policy has been to avoid confrontation with the United States, and he asserts that US intervention throughout Iranian history is the primary source of Iranian insecurity.  That is not a position without credibility.

My interest is in a path to peace by taking away the capacity for a nuclear threat against her while redirecting the machinery of war to a treaty between nations.

Perhaps, the Iranian Arms Agreement is a moot point since the United States (and now Iran after the killing of Soleimani) have rejected it, but jacked up American nationalism will not unravel this situation.  Common sense dictates that giving people respect, dignity, and sovereignty, goes a lot further toward establishing peace, than beating the drums of war.